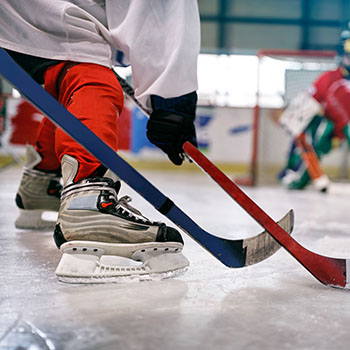 1 – NEVER WATCH THE PUCK– By watching the puck, a defenseman is taking his eyes off of the oncoming skater and therefore risks being passed by the opposing player. By watching the oncoming skater’s chest you make it much more difficult for the oncoming skater to fake around you. Keep one hand on the stick, which should be pointed with the blade open at the puck on the opponent’s stick (known as tracking), and continue to skate backwards without crossing over. The puck can be moved very rapidly from side to side, but a player’s chest can’t move more than a few inches. Therefore, your odds of staying in front of the skater are much greater. It is also important to hide your reach by keeping your elbows in close to your body. This will give the oncoming skater the illusion of a larger gap and may force them to skate much closer to you when attempting a move.

3 – Avoid crossing over when skating backwards- After setting the initial gap, avoid crossing over to help prevent the offensive player from gaining any unnecessary advantage over you. This will also allow the defenseman to stay in front of the oncoming skater more easily.

4 – Take away the middle-Always give an oncoming skater more room to the outside or boards. This will make it more difficult for the player to get to the net by creating a greater distance that he has to travel. If an offensive player is passing a defensive player on the outside, he simply has to go to the net and the offensive skater has to come towards him or is forced to take a low percentage shot from the outside.

5 – Don’t chase into low danger zones -There are 5 low danger zones within the defensive zone which include: behind the net, both corners, & both sides of the blue line. It is not necessary to chase an offensive player into any of these positions unless you are 100% sure that you can get the puck, or at least take out the man. These are extremely low percentage offensive areas and are usually used to draw a defender away from the high percentage areas in the middle. This will vary slightly in short-handed or power-play situations.

*Remember to Play Boring – Defense is a simple position to play if you play it simple. Your only responsibility is to remove the offensive player from the puck and to get the puck up the ice if possible. Defensemen who go for the puck or who are impatient when defending a player, are the ones who get beat, so keep it simple.